What a terrific airsoft sniper rifle for novices to get started in the art of sniping. Inspired by the extremely popular L96A1 sniper rifle, the UTG Shadow Ops offers outstanding balance and accuracy at a relatively wallet-friendly price. 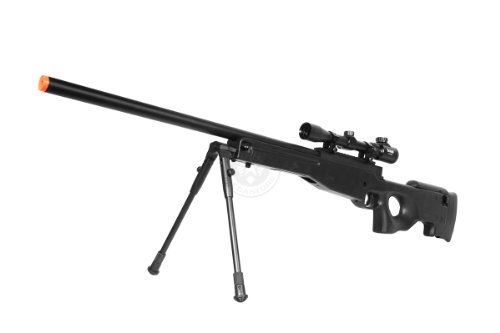 The problem with using this BB with the UTG Shadow Ops is that its trajectory tends to go out of whack upon firing, and you are likely to get frustrated especially if you are working on improving your accuracy level.

You might be tempted to push up the FPS by a notch or two by putting 0.12g BBs into the magazine. Now, that is a bad idea because the accuracy will be absolutely appalling, and you risk wrecking the rifle’s bolt in the long run. With this particular rifle, it is best that you feed it with 0.28g and 0.30g BBs. You can’t go wrong with these two types as they offer the sweetest balance in terms of precision, power, accuracy, and distance.

The rifle’s accuracy is just marvelous. Once you have properly adjusted the hop up and get some practice time in, it is not hard to blast a target that’s 150 to 200 feet from you. Unfortunately, the UTG Shadow Ops does not come with a scope.

Although an airsoft sniper scope can be purchased separately on the cheap, it is still a blunder on the part of the manufacturer. Other similar bolt action airsoft sniper rifles are supplied with scopes so it should be a standard inclusion.

The UTG Shadow Ops, however, does come with a full metal bipod. You slip it into the front grip’s end, place it on the ground, and you are ready to snipe away. The bipod while durable and helps stabilize your aiming, is slightly wobbly.

The rifle is very durable as well but it is not composed entirely out of metal. For the stock, the manufacturer used tough ABS plastic, while other parts such as the rifle’s barrel, upper receiver, and bolt are solid metal.

Weighing almost 9 pounds, the rifle is a little heavy but that’s okay as the heftiness makes it all the more realistic. The handling actually feels good with superb balance overall.

Blasting away cans and other objects is so much fun with this rifle, and one of the major reasons that contribute to the fun factor is the bolt which is not stiff at all. Pulling the bolt feels effortless even during the initial phase. Of course, the more you use it, the smoother it gets.

As far as magazine capacity goes, it’s pretty standard. The magazine is capable of storing 23 rounds of 6mm BB. Now unlike other airsoft sniper rifles with bipod, the UTG Shadow Ops comes with not one, but two magazines. Sweet!

Rookie sniping enthusiasts searching for a decent quality spring powered airsoft sniper rifle will surely appreciate the UTG Shadow Ops. There is nothing fancy about it—just a very reliable beginner-friendly rifle that’s good for the money. After learning how to maintain this airsoft sniper rifle it should last you quite some time.

Packed with a bipod this airsoft sniper is ready for picking people off in the field, a second magazine keeps you in game play. Annoyingly the orange end (a legal requirement) is going to make you stand out.

How to Zero An Airsoft Scope

Added to wishlistRemoved from wishlist 5