Who even needs a plate carrier?

As of writing this article we’ve played over a thousand airsoft games: casual, competitive, MILSIM, you name it. One of us even used to work in the airsoft industry at one of the major retailers in Southern California, and another one of us also used to work at 5.11 – one of the top tactical gear companies in the US.

So, we’re pretty dang confident in our choice of battle belts. We’ve ran through dozens in our time, some of them ended up being so used they’ve folded over almost inside out. The best battle belts for airsoft should be capable of standing up to pretty hard use, and we’ve had our fair share of that.

Let us save you the headache and hassle of wasting hundreds of dollars trying on different models and let you know exactly what are the best battle belts you should buy based on your budget (although there is one top quality pick we recommend above the rest). Make sure to check each entry out in depth. 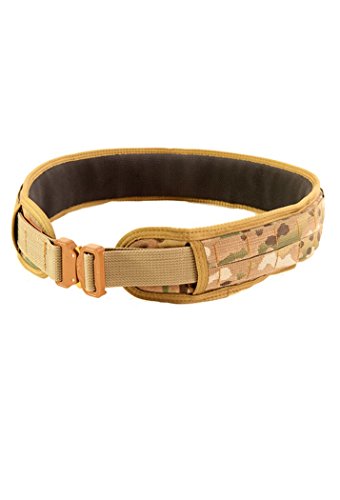 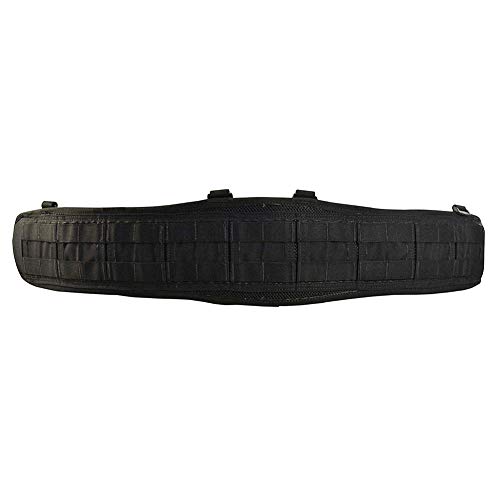 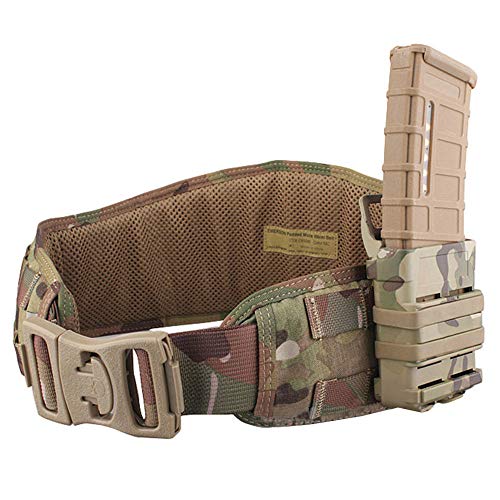 Emerson Gear was known as being the main competitor to Condor Outdoor back when we were working in the airsoft guns industry. Emerson was an outdoor manufacturer making affordable replica tactical gear like plate carriers, chest rigs, gloves, tactical belts, and other stuff. Most starting players would end up with either a Condor or Emerson piece of tactical gear, and for the most part it was functional. They were great pieces of gear for airsoft newbies though.

We thought the EMERSONGEAR battle belt outshines its Condor contemporary because it simply fit better on our body and was far more sturdy. The padding is just right for long use and the MOLLE stitching on the belt was consistent (if a little tight). We couldn’t say that about the Condor Outdoor gen II tactical belts, which are serviceable but on occasion you’ll have some MOLLE webbing that’s just stitched too narrow and that can mess up your day (and reduce your attachment options).

The main downside to these battle belts is that the included tactical belt… sort of sucks. The belt buckle is made of a cheaper plastic and you can tell that it won’t stand up to much abuse. The first thing you should make sure to do is swap out the included belt for a Fairwin Tactical Belt (a very affordable choice).

The Condor Outdoor LCS Cobra Tactical Belt surprised us. Condor Outdoor was known for making predominately entry level tactical gear for the player. However, they really outdid themselves this tactical belt. Firstly, it includes a genuine AustriAlpin COBRA belt buckle. If you’re not sure why this is good – check out this video and come back. Know that the COBRA buckle itself usually costs just as many of the battle belts out there.

You’ll see this low profile tactical belt has laser cut webbing in replacement of the more traditional MOLLE webbing. They effectively function the same way as the normal webbing, only they’re now made of a single strip of nylon increasing the overall durability.

The HSGI High Speed Gear Slim Grip Padded Belt is a slimmer, lower profile cousin of the original padded belt. The main standpoint here is the HDPE plastic stiffener that runs along the entire length of the battle belt. This keeps the unit rigid for high levels of comfort and provide high freedom of movement no matter what kind of environment.
Gear Specs

The general build quality coming from High Speed Gear products is outstanding. The MOLLE webbing on this particular battle belt are especially well made and the stitching is extremely rugged. You could, theoretically, do pull ups on this stitching it is so strong.

We ran this battle belt hard – playing at multiple MILSIM ops along the west coast. It didn’t fail us a single time.

However, there are some hang ups we’re having with the narrow MOLLE. it comes with only 2 rows of PALS webbing, which is fine if you’re utilizing something like MALICE clips (which is what their own TACO magazine pouches use), but if you use the type of pouch or holster rig that requires 3 rows of webbing to secure itself. You will need to make some compromises with this belt.

For those magazine pouches that come with their own attachment straps you’ll soon see that you can only loop in a single time (which isn’t as secure as weaving the strap between your rig and your pouch). It becomes difficult to recommend this to every since user out there especially if they have no plans of running TACO magazine pouches.

The Viking Tactics VTAC Battle Belt is a luxury choice for the player looking to have the best of the best. This is the classic battle belt design so often imitated by other airsoft gear manufacturers. This the lightest battle belt coming in at 8 ounces (not including the inner belt) and is built for high speed and low drag.

We know infantrymen who have gone on deployments to Afghanistan sing praises about this battle belt. The high density plastic insert keeps the belt rigid and comfortable. Additionally, the MOLLE webbing is slotted, which allows you to weave your inner belt loops so you can use standard belt specific attachment pouches or holsters.

As a whole, you can expect top quality from a Viking Tactics belt – as they make sure all their products are of top quality. This was built for hard use by real steel gunfighters and should service you well in any kind of skirmish or game you find yourself in.

Our Choice for Best Battle Belt:

A part of us wants to instantly just recommend the HSGI Slim Grip Padded Belt. These are some of the best battle belts we’ve used most amongst the writers and we know that they are worth every penny. BUT – the the narrow 2 rows will be a problem for users who already have pouches with integrated attachment straps. For those looking to exclusively use High Speed Gear TACO pouches (they’re really nice!), or MALICE clips, then we’d immediately recommend their battle belt as well.

We want to pick a belt that is good enough for all players that balance function, durability, and value. So, with all that in mind Airsoft Core‘s top pick for general airsoft use really goes go to:

We are honestly quite surprised to pick a Condor Outdoor belt product over HSGI or VTAC. They’ve come a long way in increasing the quality of their battle belts. Here are our top reasons for why this was chosen:

See the below link(s) to view current prices and up to date user reviews on these war belts:

Most of these airsoft battle belts do not come with inner tactical belts: do you have a recommendation?

Why, yes we do. There are three options we refer to and it depends on your budget. If you’re low on budget you’ll want to consider Fairwin Tactical Belts – which includes a COBRA belt buckle replica that is actually quite solid and fits well in battle belt loops. Even if you don’t end up wearing battle belts these are stylish enough to just wear on your everyday pants.

*If you’re planning to use this belt for real steel and heavy use, go with something of higher quality* 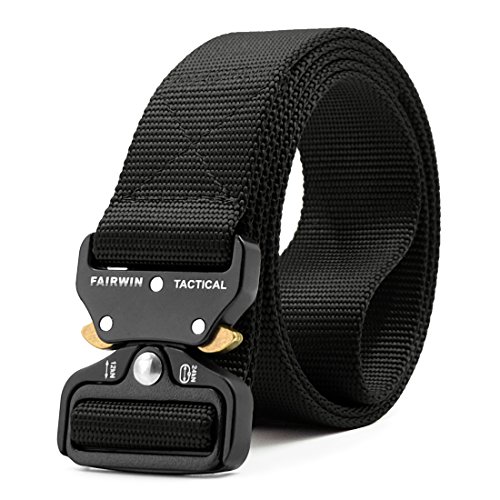 Our top quality recommendation if you have a higher budget is the AWS Tactical Belt. These tactical belts are pricey, but we’ve tried 5.11, Ronin, VTAC, and all sorts of different belts and this one is the stiffest and most comfortable. 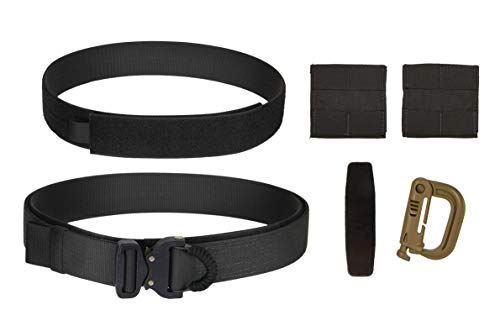 Finally, if you need a belt that is somewhere in the middle then go with the 5.11 Sierra Bravo Duty Belt. It isn’t as pricey as the AWS Tactical Belt but is a step above in quality compared to the Fairwin. 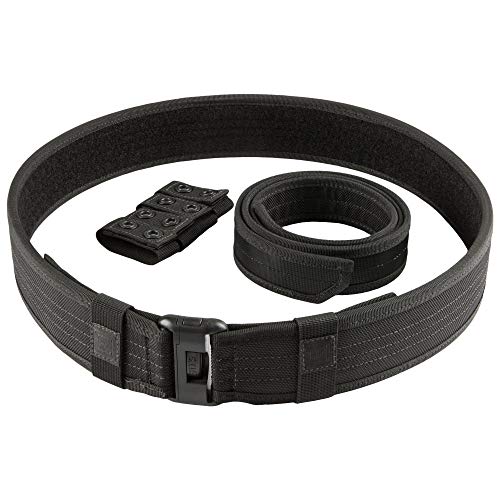 How to Build an Airsoft PMC Loadout | Tactical Gear Guide