How do Airsoft Guns work?

[vc_row][vc_column][vc_column_text]At AirsoftCore we know that for people who aren’t familiar with these recreational weapons, the learning curve can seem really intimidating. We don’t want the learning curve to be intimidating at all. The sooner you can know the basics about airsoft guns and how they operate, then the sooner you can get to using them and gearing up for different forms of recreation with them. We’ve taken the time to answer some of the more common questions concerning airsoft weapons so that users can feel more reassured as they move forward with acquiring one for themselves.

How do airsoft guns work?

Airsoft guns are powered by air and are able to shoot round projectiles (typically about 6mm, although users can find them in other sizes). You’ll find that airsoft guns have several attributes that make them so much fun to operate. Here are a few of them:

The most common airsoft guns utilize compression in order to launch projectiles, such as airsoft revolvers. With this understanding, there are different forms of compression used for this purpose.

You have spring (which would include options that are electric or manual), and then you have gas compression types. Gas options might include CO2, HFC or what’s called Green Gas.

Understand that with these different propulsion methods come different sub methods they can be split into, which as a result can variate the functionality of the airsoft gun.

Here’s a brief description of the three main types of airsoft guns:

Thee are guns that make use of compressed gas in order to fire a pellet. Where the gas chamber is going to be on a given gun is going to be different depending on the gun. Users should make sure they are aware of this if or when it needs to be replaced.

These are airsoft guns that at first sem the same as gas powered options, but are different due to their power supply. Instead of utilizing gas, these guns utilize a battery. In most cases the battery tends to be a 9.6v rechargeable one. There’s an electric motor (which gets its power from the battery) that compresses the pump spring inside the weapon in order to shoot off the pellet.

How are airsoft guns made?

At AirsoftCore we want to make sure users get a good idea of what it truly means to potentially own an airsoft gun. In terms of how they are made we’re not talking about the actual manufacturing process. We’re talking about the purpose for which they are designed and how they can be altered.

The best airsoft assault rifles are made to resemble real guns, but as mentioned before some brands can do this better than others. Superior materials, internals and shooting ability can be impacted by this. However, airsoft guns aren’t just made to be what they are, meaning things can’t be altered. Users have the option of customizing their own airsoft gun with different upgrades in order to get the look and functionality they desire.

Customization makes things better for a user when they decide to engage in play. Some of the customization users can make would include these below:

Understand that if the goal is to customize an airsoft gun, then this is going to involve a higher cost than if you were to just purchase one pre-made.

How do airsoft shotguns work?

We would say that airsoft shotguns are a really good option for someone who is a beginner to using these. These guns will commonly fire off one round at a time (multiple rounds are possible though) and typically operate by means of spring action.

Airsoft shotguns can be some of the least expensive options on the market and are good for things such as target practice.

How does the sport of airsoft works?

Airsoft is a sport where people can take on different roles in order to participate. These roles can include Rifleman, Marksman/Sniper, Support Gunner or Team Leader. Users can dress in specific forms of gear in order to create a realistic war like setting or competitive environment.

The purpose is to take out other players by means of hitting them with your weapon, which can prove challenging depending on several factors. The field you might play on for example. There are usually designated areas for this sport and they can be designed to provide different challenges in order to make hitting a target all the more challenging. There are entire leagues and associations a person can potentially participate in.

How does airsoft hop up work?

The hop-up feature is nothing more than a special feature that enables a user to make changes to the backspin put on a BB when it leaves out of a gun. The backspin enables the BB to shoot out in a straighter fashion and fly much further to.

How do airsoft grenades work? Similar to real hand grenades, airsoft grenades are designed to create a sudden blast of projectiles. This is going to come in the form of plastic BB’s. Most of the time. Real life grenades make use of high explosive elements as a form of propellant. With airsoft grenades they use either gas or CO2 in order to make a cloud of BB’s. All someone has to do is properly load the BB pellets into the grenade body. Once everything is properly loaded there’s a form of pin and spoon used to set it off.

There are also different forms of airsoft grenades a person can use. For instance you have dummy grenades, which don’t go off at all. Then you have sound grenades, which utilized Co2 to make a loud distinct noise.

How do airsoft snipers work? 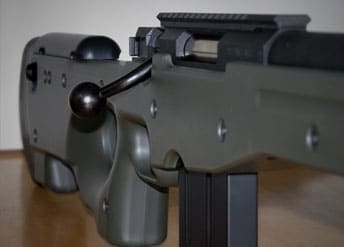 Airsoft snipers are a good option for someone who has experience already in terms of other airsoft weapons. These guns can be kind of tough to learn how to use properly. Typically their firing rate is going to be a bit slower, but this is offset by the fact that they have higher range capabilities.

Just as with real sniper rifles you lock in on a target by means of using a scope strategically located on the gun. You then wait, usually concealing yourself somehow until you’re able to get a good shot at your selected target. Some people have argued that if you aren’t willing to spend a decent amount of money on one of these rifles, then you should go with another option. At AirsoftCore we feel this is left for the user to decide.

What about durability of airsoft guns or build quality?

In order for an airsoft gun to last a long time and take some damage in play, then it has to be durable. Durability is going to be dependent on the quality of gun being used as well as the materials it’s created from. For instance you have plastic options, which tend to not last as long as their metal counterparts. This is unless you get plastic options made from really tough material.

Quality parts will ensure problems such as rusting and problems with internal parts are kept to a minimum. Higher quality metals can minimize the occurrence of scratching issues with the paint or coating. Metal bodies, even the toughest ones have a tendency to bend or dent with lots of use. Plastic might be most suitable for most, but know it can be upgraded to a metal body at some point in the future when the user decides they want to spend more money.

At AirsoftCore we know that getting an airsoft gun requires a lot of thought and attention paid to specific details. We’re here to help you anyway we can so that you invest in an airsoft gun that’s going to fit you just right[/vc_column_text][/vc_column][/vc_row]

Why buy an Airsoft Pistol?