A strong blend of realism and reliability, ASG Dan Wesson 8″ delivers a solid boot in the rear to the airsoft line of revolvers. The revolver features extremely detailed and realistic construction complete with a rear sight that’s adjustable and a double action trigger system.

This means that you might want to be careful where you flash it since the realism factor is so dead on; someone might just call the cops on you! 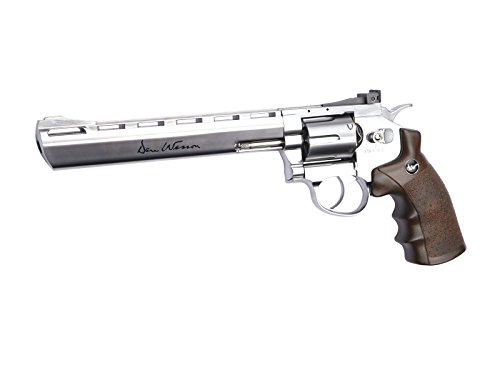 The revolver’s realistic look is enhanced by the double action trigger system. You can either cock the hammer first prior to firing so that the trigger pull is lighter, or just squeeze the trigger right off the bat.

The revolver feels absolutely solid in the hand. It

has that real pleasant heft to it and while the revolver feels good to shoot, we feel that the trigger’s weight is just a tad bit heavy even when you cock it first before firing.

With metal used to create most of the revolver’s components, the durability score is above average. Only the ergonomic grip, hammer, and tip are composed of ABS plastic.

It’s quite regrettable that the hammer is made of plastic as this does take away a bit of its much-acclaimed realism element.

Another realism diminisher is the paint on the revolver’s cylinder tends to chip off. Friction caused by the rotation of the cylinder is obviously the culprit here.

On another minor negative note, the speed-reloader that comes with the revolver doesn’t really fit properly. Still, it works alright.

In the accuracy side of things, ASG’s Dan Wesson revolver is absolutely splendid. The adjustable sight makes aiming a snap and when loaded with the right BBs, the precision and power of this revolver are nothing short of satisfying.

You can load its cartridges with 0.20g BBs, 0.25g BBs, and 0.28g BBs. By the way, this airsoft revolver is like your typical six-shooter. It has six individual cartridges and each one stores a single BB. For added accuracy, the revolver comes with a tactical rail that can be fastened on the top of its barrel, so feel free to install a red dot sight or even a scope.

ASG’s Dan Wesson revolver is also a winner when it comes to the power department. Honestly, this thing packs a wallop!

We recently shot a bunch of soda cans filled with tap water, and it was pure joy to witness the revolver’s sheer power as each BB that went flying out of its barrel penetrated clean through those water filled cans.

Heck, the shots were powerful enough to make clean through holes on both sides of a couple of rather hefty corrugated shipping boxes.

The ASG Dan Wesson CO2 revolver packs a punch when out in the field, delivering over 500fps with .20g bbs. It looks and feels realistic in hand, though build quality is a slight downside.

Related Articles
We will be happy to hear your thoughts

Other Airsoft Buying Guides
Help & Advice
Who Are We?

AirsoftCore is dedicated to bringing impartial airsoft reviews and advice for beginners and experts alike. Whether you’re looking heading out on a skirmish at your local field, in a competitive team, or want the latest Airsoft gun stats, we’re here to help.

Playing airsoft since the 90’s, AirsoftCore’s experts know everything you need to know about Airsoft Pistols, Assault and Sniper Rifles, Revolvers and what you need to be out in the field.