From the get-go, the most instantly striking feature of this Echo1 General Assault Tool AEG submachine gun is its incredible precision in CQB play. The lightweight construction helps a lot too.

Since the gun is pretty light (around 3.5 pounds), you can easily wield it with one hand.

Even better, get another one so you can duel-wield them and enjoy some John Woo style firing action! 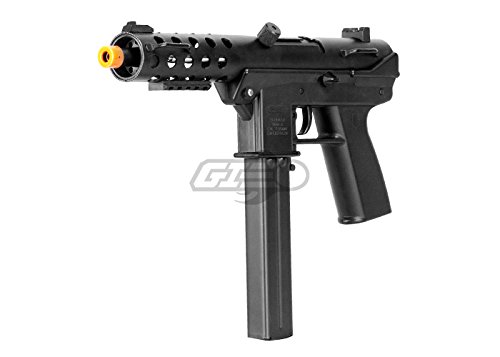 It feels great to use this in an indoor arena that’s not too big.

That’s where you’ll be able to fully appreciate its phenomenal accuracy, especially when set in semi-auto.

The barrel may be super short, but boy oh boy, this baby can shoot surprisingly far.

Of course you shouldn’t expect first-rate accuracy at said distance.

As mentioned, the accuracy is remarkable in a tight indoor CQB skirmish, and in that kind of environment, your target is often less than 70 feet away, so aim and fire away.

But if you can’t hit a target within 70 feet with this AEG GAT submachine gun, then you might as well point it at your temple and squeeze the trigger.

Just kidding, don’t do that!

To be fair, if your accuracy is off when firing under 50 feet due to the BBs curving upward, then the fault probably lies with the weight of the BBs.

Sure, using 0.20g BBs with this gun can help you achieve 300, maybe even 330 FPS, but the curving up issue is a major annoyance.

The obvious solution is to load the gun with heavier BBs like 0.25g or 0.28g. We recommend the latter if precision is a priority for you.

Like most well-constructed air soft guns, the build quality of this SMG is nice with the usual blend of metal and high impact reinforced polymer.

The one component that’s not so nice, however, is the bolt cover. Be warned, it’s horribly flimsy!

The gearbox is metal and same goes with the 250-round magazines (a spare magazine is included—yay!).

Problem is, when firing in full auto, you could let off maybe 30 rounds or so, and then you’ll need to go through the tedious process of winding it up to full click.

Winding between shots is a must or the magazine will fail to feed. So, in other words, expect plenty of winding when using this gun.

The stock 8.4v Ni-MH battery that comes with the Echo1 General Assault Tool (GAT) airsoft gun is decent. Even powered by an 8.4v battery, the gun still shoots fairly rapidly.

A good number of users recommend a lipo battery to improve its performance. That’s not a bad idea, but the stock battery works just fine.

Eventually you’ll get used to it, but in the initial phase, the process of putting in the battery is sure to irritate.

Another downside is that some folks may not like the gun’s loudness.

This gun could really use a little fine-tuning, but certainly worth checking out if you’re into submachine guns, and you’re willing to overlook its flaws which are not that significant.

Are Airsoft Munition Dangerous? What You Need to Know.

Related Articles
We will be happy to hear your thoughts

Other Airsoft Buying Guides
Help & Advice
Who Are We?

AirsoftCore is dedicated to bringing impartial airsoft reviews and advice for beginners and experts alike. Whether you’re looking heading out on a skirmish at your local field, in a competitive team, or want the latest Airsoft gun stats, we’re here to help.

Playing airsoft since the 90’s, AirsoftCore’s experts know everything you need to know about Airsoft Pistols, Assault and Sniper Rifles, Revolvers and what you need to be out in the field.